that connects to a DVL III. The GPR system is durable and can handle a lot of use. As shown in the photo, the system is fairly easy to put together. A small cable is used to connect the measuring wheel to the main cable going to the DVL. A slightly larger cable is used to connect the GPR main cable to a button trigger on the SmartHandle. If this option is not used, acquisition is started and stopped using the menu keys on the DVL. 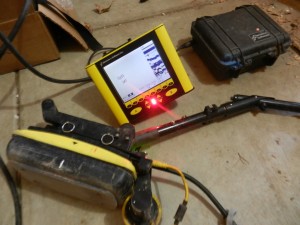 The third cable is fairly thick and connects to the DVL. At the DVL the cable splits. The additional connector is used to power the GPR system. It often uses a battery pack. As the image shows, a large capacity battery pack may be connected to the DVL. The large battery pack can be attached to other Sensors & Software GPR systems. However, a much smaller battery pack is available that can be worn around the operators waste. This makes the GPR equipment more portable. 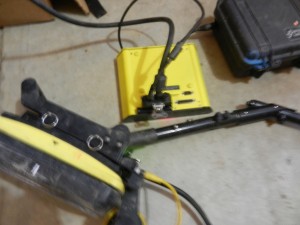 The design of the Noggin 1000 MHz GPR system is different then the PulseEkko or Conquest versions. These GPR systems use a smaller sensor or antenna. The measuring wheel is an integral part of the antenna. While the smaller and more lightweight design is good on smooth surfaces, like concrete, asphalt, or wood, the sensor may not hold up well over rough terrain. Unlike the Conquest or PulseEkko 1000 MHz antenna version, the Noggin 1000 MHz GPR setup can be used with a SmartCart. The SmartCart has four large wheels and is designed to cover 100’s if not 1000’s of linear feet in one record. Thus, it may be preferred over the Conquest GPR system for imaging long paved surfaces, ice, or  gravel.